ORIGIN OF THE CANADIAN FOUNDATION 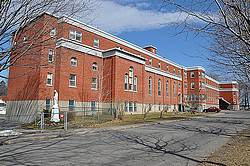 At the turning point of the 20th century, the French religious persecution forced the Sisters of the Sacred Heart of Jesus to look for other horizons. At the request of the Canadian Missionnary Oblates of Mary Immaculate, five Sisters arrive in Ottawa in 1902. They courageously accept to start out in housework to find soon after the works which reflect their identity and charism. They adapt themselves to the customs of the country and become initiated into the methods and teaching syllabus. They are appreciated for their simplicity, discretion and courage. 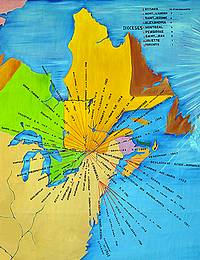 IMPLANTATIONS
Quickly, with the numerous vocations, we find the Sisters mostly, in the parishes along the Gatineau and Outaouais Rivers, the Franco-Ontarian of Eastern Ontario, the South of Ontario, the region of Montreal and the Laurentides. Like Angélique, they are very close to the people. They also open four boarding schools for young girls. Their missionary spirit leads them to Northern Canada, Cameroon-Tchad, Peru, Papua New Guinea, Hondura.
In 1961, becoming more numerous, the Sisters form two Provinces, according to geographical divisions: Ontario and Québec. In 2005, they come together again, as one province. The majority of the Sisters now live in the large region of Ottawa/Gatineau.
MISSION
In the course of history, besides the service in institutions that they kept for several years and education which is the main element of their mission, the Sisters also devote themselves in health care, pastoral and social services. Today, we find them again helping the poor and newcomers as well as in psychological and spiritual accompaniment. Even when retired, they are always open to the needs of different environments.