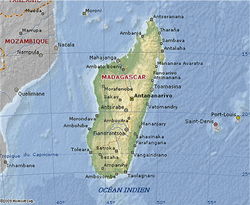 ON THE RED ISLAND

In 1957, as a result of the encyclical “ Fidei Donum ” (gift of faith) of Pope Pius XII, the Congregation of the Daughters of the Holy Virgin felt “ responsible for the coming of the kingdom of God ” and after several years of reflection, consulting, advice, prayer, a unanimous and firm decision was taken in August 1960.

It is through a very simple relationship of correspondence between the children from Saint Michael’ school in Rennes, held by the “ Daughters of the Holy Virgin ”, and the Madagascan children of Mandoto where a Breton missionary, Father Hamon, lived, that the call to the missionary life took shape.

Father Hamon wrote in May 1960: “ Here, in Mandoto, religious Sisters are needed … If the Daughters of the Holy Virgin could make an act of Faith and Hope by sending three or four Sisters in Mission ! ”

A few important stopping places : Lisieux, Nevers, Paray-le-Monial, Hautecombe. On September 5th, the trio boarded in Marseille. 20 days of travelling and the joy to accost at Tamatave. On October 1961, they arrive at Mandoto, where they are warmly welcomed.

In 1965, Two young Madagascan girls : Edwidge, Gilberte take off to France for a formation to religious life. Marie-Rose joins them a few months later.

In November 1967: opening of a community in Ankazomiriotra by Mary-Edwige, first Madagascan Sister.

In 1968, the small tree grows. Gilberte and Marie-Rose, come back to their country after their first profession. Following the General Chapter, a “ Regional ” is nominated, the Daughters of the Holy Virgin take the name of “ Fraternité Notre-Dame”. On June 20th 1969, the blessing of the formation house takes place in Antsirabe.

The Big Island lives an irreversible turning point, a socialist revolution : the upheaval of mentalities , the “ malgachisation ” of teaching.

The foreigners ask themselves the question of their presence : stay or leave ?

1973: in this difficult situation, the first three Madagascan Sisters take their final vows.

Up to 1985, the small group strengthens its foundations. The mission of the Fraternity Notre-Dame ‘ Sisters establishes its bases.

In Faith and Trust, they dare answering missionary calls.

To be there… because Christ is there.

To be there… presence of the Church.

with the children, women and the sick…

by daily sharing in the bush.

Mission with the children:

… with young girls and women,