On December 8, 2020, there was a celebration at the Sisters of the Sacred Heart in Ngaoundéré in Cameroon. We welcomed four young women to the Novitiate, one from Kenya and the three others from Madagascar. 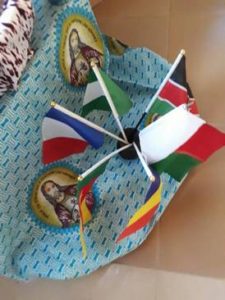 This phase in their journey lays the foundation of Formation because it is meant to gradually initiate young women to the life of a Sister of the Sacred Heart of Jesus.

After giving thanks to God for the gift of his call to Monicah, Faniry, Solange, Arlette, with a magnificent song of thanksgiving in Malagasy, the different rites specific to this commitment were presented and carried out:

The steps to mark the entrance to the novitiate were: the distribution of the Constitutions and Rules, Cross and Rosary, given out in a spirit of quiet reflection; the signing of the minutes, understood as the commitment between both parties.
Placing themselves in the hands of Mary was followed by a song in Swahili, a language in Kenya, inviting everyone to dance. 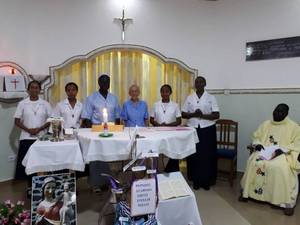 A festive liturgy of the Eucharist followed.  The Eucharist is the center and summit of a life of intimacy with Christ during this time of formation.

The two levels of Formation (Novitiate-Postulancy) and the sisters total eleven members of different nationalities coming from six countries: Cameroon, Kenya, Madagascar, Chad, Nigeria, and France.  The flags of each country formed a harmonious bouquet of colours setting the tone of the celebration, creating openings for hope.

The Eucharist was lived in a spirit of Pentecost, bursting out in songs of all different tongues.

The road continues to lead towards the future.