All the Sisters of the Region of Cameroon were in tune with the rhythm of the Congregation for three main events:

• Commemorating the death of Angélique Le Sourd, the Foundress of the Congregation
• The benediction of the new formation house in N’Gaoundéré
• The opening of the new N’Gaoundéré community

At the crack of dawn on November 16, the workers still present on the construction site painted the last brush strokes and then left as the invited guests arrived.

Around 08:45 Monseigneur Emmanuel ABBO arrived in the community. He was relaxed and, without a doubt, happy about the new community that he is welcoming into his diocese.

Starting at precisely 09:30 the celebration began, marked by two significant events: the benediction of the house and the Eucharistic celebration.

The celebration began outside; all of the celebrating priests, and the crowd made up of sisters of the Sacred Heart of Jesus, members of both female and male congregations, associates, friends, a few construction workers accompanied by the building contractor Koulagnia Célestin, gathered together to listen attentively to the history of the house as presented by Sisters Marie Françoise Naël and Marie Thérèse Niget.

After the opening prayer of the celebration, Monseigneur, accompanied by Father Emmanuel Bouba, invited the Sisters of the Sacred Heart that were present to come forward for the ribbon cutting which began the rite of benediction of the house.
From the door of the main entrance, the celebrant initially blessed the outside of the entire building and then each room in the house. Before entering the chapel, the cross, the lectern and the tabernacle were blessed. Three people were assigned to put them in their proper places in the chapel after they each received the proper prayer and benediction.

And thus began the Eucharistic celebration.

What we retained from this second event was given by the celebrant. In his homily, Monseigneur Emmanuel ABBO made clear what events were bringing us together on November 16, 2019. 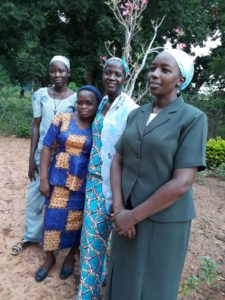 He specifically addressed the new postulants. Monseigneur asked them to question themselves sincerely about “WHO?” they are searching for by coming to this house. If it is not Christ, they still have time to orient themselves elsewhere.

At the end of the Eucharist, we were all invited to pose for a group photo and share a glass of friendship in the community room. 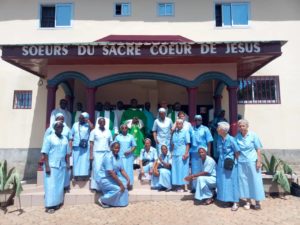 106th World Day of the Migrant and Refugee

Preparing to welcome the Saviour of the World!